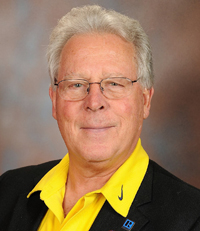 Born in south central Ontario, Canada, Dave moved with his parents to New Hampshire when he was about eight.  The family later moved to West Virginia where he attended high school.  He attended West Virginia University and earned a Bachelor of Science Degree in Industrial Engineering.  He also joined the US Army Reserve and served in several units including an ammunition ordinance company and a US intelligence company.  He was honorably discharged after completing his six-year commitment.

He joined Owens Corning Fiberglas upon graduation from West Virginia University.  He worked for a while as an Industrial Engineer at their plant in Huntingdon PA and then transferred to the plant’s Data Processing department where he became the supervisor after completing a specialized programming course.  After managing the conversion from a manual data processing department to a computerized department, he was asked to join the division information processing department in Toledo, Ohio.

While working in Toledo, Dave attended the University of Toledo during the evenings and earned a Master of Business Administration with a specialty in Marketing.  It was while he was working for the division information systems function, doing significant travelling to the division’s various plant locations, that he met his bride to be, Kathy.  They were married just weeks after Dave had accepted a job managing a systems conversion project in the company’s European Division.

They moved to Brussels, Belgium just two weeks after the wedding, making the trans-Atlantic trip on the USS France, one of the largest ocean-going liners at the time.  While in Europe, they were fortunate to be able to visit many major cities and smaller towns all across Europe and Great Britain.  After about 18 months, Dave’s project was complete and they returned from Brussels to southern Michigan where Dave continued working for Owens Corning.

After surviving a hostile take-over attempt by 84 Lumber, the company was forced to undergo a major down-sizing and Dave moved to a job with another company in Toledo, Ohio Plate Glass Company, as their Director of Information Systems.   After several years, that company merged with another glass firm just outside of Chicago and the corporate functions were transferred to that location.

Dave worked for just under a year in transition between Toledo and Chicago while their house was on the market.  This eventually proved unworkable, and Dave accepted a position as Director of Information Systems with RIS Paper in downtown Cincinnati. Their house in Toledo finally sold and they moved to Hidden Valley Lake in August of 1994.

Kathy left her corporate job in Toledo and got her real estate license shortly after moving.  She excelled at real estate from the beginning, and Dave found himself spending hours in the evenings and on weekends supporting her in her new career.  After making a couple of job changes in Cincinnati, Dave got his real estate license in 1998 and left the corporate world so that he could fully support and assist Kathy in the real estate world.

In 2001, Dave got his Brokers license and on February 6, 2002, Dave and Kathy opened Premier Properties Real Estate.  Dave was the Principal Broker/Managing Broker.  The company survived the real estate crash of 2008, 9, and 10 and has been one of the top real estate companies in Southeastern Indiana ever since, especially in and around Hidden Valley.   Dave has been very active in the Southeastern Indiana Board of Realtors and was the Realtor of the Year in 2012.  He has served on the Board of Directors for many years and was board President in 2009 and 2018, and again in 2022.

Since moving into Hidden Valley Lake and finding a house right on the lake, Dave has been very active in the community.  He joined the Lakes Committee in 1995 and within a few years was voted in as Chairman of the Lakes Committee, a position he still holds.  As such, he has worked with about six different community managers and hasn’t missed many Board of Directors meetings.   This has given him an invaluable background in the workings of the valley and also anything related to the lake itself.  In 2019, Dave went through the process and became a naturalized US Citizen.  Dave and Kathy have one daughter, Shannon Elizabeth, who is a graduate of Ball State University and currently lives in Nashville Tennessee.

WHAT'S MY HOME WORTH?

Get Your FREE Valuation